In 2010, a small group of avid bicyclists joined together to advocate for safe and quality bicycling. By March, 2011, Adirondack Cycling Advocates was successfully incorporated as non-profit corporation; obtained 501(c)(3) status; recognized by the Warren County Board of Supervisors.

Since inception, Adirondack Cycling Advocates has worked collaboratively with NYS, Warren County and several municipalities to advocate for on-road and off-road repair and expansion throughout Warren County. A letter-writing campaign, started last year, sent a direct request to NYS politicians and DPW directors to include funding in the budget to repair many of the crumbling state roads throughout Warren County. Adirondack Cycling Advocates meets each year with county and local DPW departments to recommend roads in need of repair and to suggest Warren County Bikeway improvements. Installation of safety/directional signage is in the works for the Bikeway and many area roads. Collaboration with NYBC and IMBA to advocate for safe bicycling on roads and trails is ongoing.

Adirondack Cycling Advocates provided active support for construction of the Rush Pond Way.  The Rush Pond area is also seeing a major expansion with the construction of a looped section of single-track trails  that will connect  to the  extensive Gurney Lane Trails to form the 50 km. Gurney Lane-Rush Pond Bike Trail Corridor. A comprehensive connector path system, currently being constructed in several phases, will join the Warren County Bikeway to the Feeder Dam Canal Trails, and ultimately to the  Champlain Canalway Trail.  Construction of the Half-way Brook section will be completed this summer.   provided funding for the signage on the Halfway Brook Trail, and the  design and construction of the Rush Pond single-track trails.  The next phase of construction from Peggy Ann Road to  Old Forge Road is in the initial planning stage.  Adirondack Cycling Advocates supports UHRT’s “Rails to Trails” project to convert the existing rail line to a multi-use trail.

Each year Adirondack Cycling Advocates has sponsored Summer Bike Rides to educate bicyclists of all levels about safe riding.  The successful Harry Elkes Ride, held every September is Adirondack Cycling Advocate’s feature ride.  This year, the 7th Annual Harry Elkes Ride will be held on Saturday, September 26th.  Riders start from The Hub in Brant Lake and  are able to choose from three rides to fit their  level of ability and enjoyment.   The Cycle Challenge is now in its 5th year and offers the chance for bicyclists to experience a variety of both on-road and of-road rides throughout the scenic Southern Adirondack Region.

Please support our efforts of advocacy for, and expansion of, safe bicycling. We accept and appreciate any amount you are able to give. We do need your support more than ever. 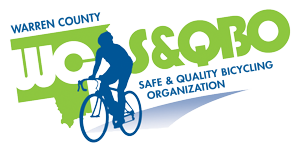