“Axi-dents”. . .Yeah, yeah, I KNOW! Shoulda’ been more careful in turning right @ an intersection. . .Despite my green light, despite seeing no-one visible around corner of building. . .I collided w/ a young man on HIS bicycle: 1.) Riding on the sidewalk. 2.) On the “left side of the road”. 3.) Phone in one hand, earbuds <on>. 4.) Never even slowed down for intersection crosswalk against a red light & 5.) certainly not “in” said crosswalk as I started thru, thus dictating that I stop for pedestrian/cyclist. So what does one say? After the initial epithet lying on pavement. I immediately “cooled my jets”! Failed to have one of my WCSQBO cards w/ me while looking in my backpack pockets for card case & explaining to The Young Dude that I just happened to be on their B.O.D. I wanted to offer him said card to maybe get educated about the rules of the road, etc., et al. . .BUT. . .”But what?” he queried. I have no answer for a clearly older teenager/young adult not having the knowledge, the ability, the respect to share our roads responsibly. . .so I have a sore left shin bruise, but no other damage to myself nor bike. . .AND I STILL DON’T KNOW WTF WE CAN DO AS WCS&QBO, UNDERGOING “RE-BRANDING” OR WHAT!¿ 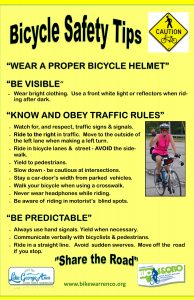