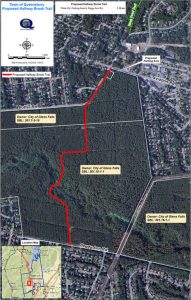 Queensbury Supervisor John Strough said the same question comes up over and over.  “Everywhere I go, people ask me, ‘Halfway Brook Trail? Halfway Brook Trail?’” he said, referring to a proposal to open a section of Glens Falls watershed property in Queensbury for public recreation.

Discussion of the intermunicipal project broke down in February when Queensbury officials objected to provisions in a licensing agreement the city proposed, and Glens Falls Mayor Jack Diamond said the city was not willing to negotiate changes.

Discussion is back on, and Diamond has submitted a revised proposal for Queensbury officials to consider. Strough negotiated the revised proposal line-by-line directly with members of the city Water and Sewer Board, Diamond said.  “Some early comments (from Town Board members) look at it very favorably. … I think we’re on a good path to getting this approved,” Strough said.

The licensing agreement would allow the town to develop a public recreational trail between Aviation and Peggy Ann roads on city-owned watershed property. The project would include construction of a pedestrian bridge over Halfway Brook.